The HOW Institute for Society

Now more than ever, we need leaders to guide us over, around, and through these times of turbulence and challenge. We need leaders who put humanity, shared values, and purpose at the core of how they lead. We need moral leaders.

In collaboration with our partners, The HOW Institute for Society will co-host a one-day summit bringing together diverse leaders from varied fields—including business, government, education, non-profits, the military, religion, sports, media and entertainment—and all generations to stimulate and inspire fresh thinking and concerted actions to help answer the most vital questions we face as a society.

Urgency and action are at the core of the Summit. The coronavirus crisis demonstrates that unprecedented forces and technologies have dramatically reshaped our world faster than we have yet been able to reshape our institutions, our leadership and ourselves. A future that includes dynamic capitalism, vibrant democracy, healthy communities and free societies depends on the rise of moral leadership and values-driven behavior. 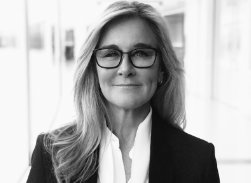 Angela Ahrendts was most recently Senior Vice President of Apple Retail based in Cupertino, CA. During her five years at the company she integrated Apple’s physical and digital businesses to create a seamless customer journey for over a billion visitors a year. Under her leadership she redesigned the stores, reimagined the experience, and recrafted roles for 70,000 employees globally. The launch of Today at Apple was one of the most transformative programs who’s mission is to encourage connection, inspire learning and unlock creativity. Today there are over 18,000 sessions held a week enriching the lives of customers and communities worldwide.

In 2006 Angela relocated to London to join Burberry where she served as Chief Executive Officer for nearly nine years. She led the company through a period of phenomenal global growth and repositioning Burberry as a global luxury brand. Her leadership focus on culture, values and positive energy resulted in tripling the business and quadrupling the share price.

Prior to Burberry, Angela spent 25 years in New York as Executive Vice President at Liz Claiborne Inc., and earlier in her career as president of Donna Karan International.

Angela has a BA from Ball State University where she was awarded an honorary doctorate of Humane Letters in 2010. She was also a member of the UK’s Prime Minister’s Business Advisory Council from 2010 to 2015, and named Honorary Dame Commander of the British Empire in 2014. Angela has consistently been recognized by Forbes, Fortune and the BBC as a Top 100 Global Executive. She is currently a member of the Board of Directors of Ralph Lauren Corp. and Airbnb, and a Well Member with charity: water. 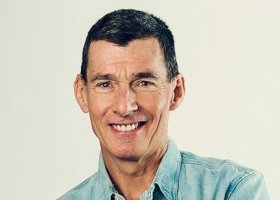 Chip Bergh is the President & Chief Executive Officer of Levi Strauss & Co. He is also on the company’s board of directors.

Levi Strauss & Co. is one of the world’s largest brand-name apparel companies and a global leader in jeanswear. The company designs and markets jeans, casual wear and related accessories for men, women and children under the Levi’s®, Dockers®, Signature by Levi Strauss & Co.™ and Denizen® brands. Our products are sold in more than 110 countries worldwide through a combination of chain retailers, department stores, online sites and a global footprint of approximately 3,000 retail stores and shop-in-shops.

Prior to joining Levi Strauss & Co. in September 2011, Chip had a 28-year career at Procter & Gamble (P&G). Chip “grew up” in brand management and served in a number of leadership positions with increasing levels of complexity and scope. His last assignment before joining LS&Co. was group president for global male grooming. He was the first P&G employee assigned to the Gillette business following P&G’s $57 billion acquisition of Gillette in 2005. He led the integration and then ran the Gillette Blades & Razors business along with all of P&G’s male grooming brands (Gillette, Old Spice and The Art of Shaving). Prior to that, Chip led all of P&G’s business in India, Southeast Asia and Australasia.

Chip has led many iconic brands during his career including the creation and launch of Swiffer (P&G’s most successful new brand in the last three decades), the turnaround and growth of Old Spice, in addition to Gillette, Folgers coffee and Jif Peanut Butter. He has lived and worked in the United States, Asia and Europe and has run large global businesses and brands.

In July 2017, Chip was named non-executive chairman of the board of HP Inc. (HPQ), the market-leading printing and personal systems company. He has served as lead independent director of the HP board since March 2017 and as a board member since the company’s separation in 2015. Chip has also previously served on the board of directors for VF Corporation and the Economic Development Board of Singapore.

In April 2019, Chip was named one of the World’s Greatest Leaders by Fortune Magazine, coming in at No. 16, and has been widely recognized for his position on values-driven leadership. 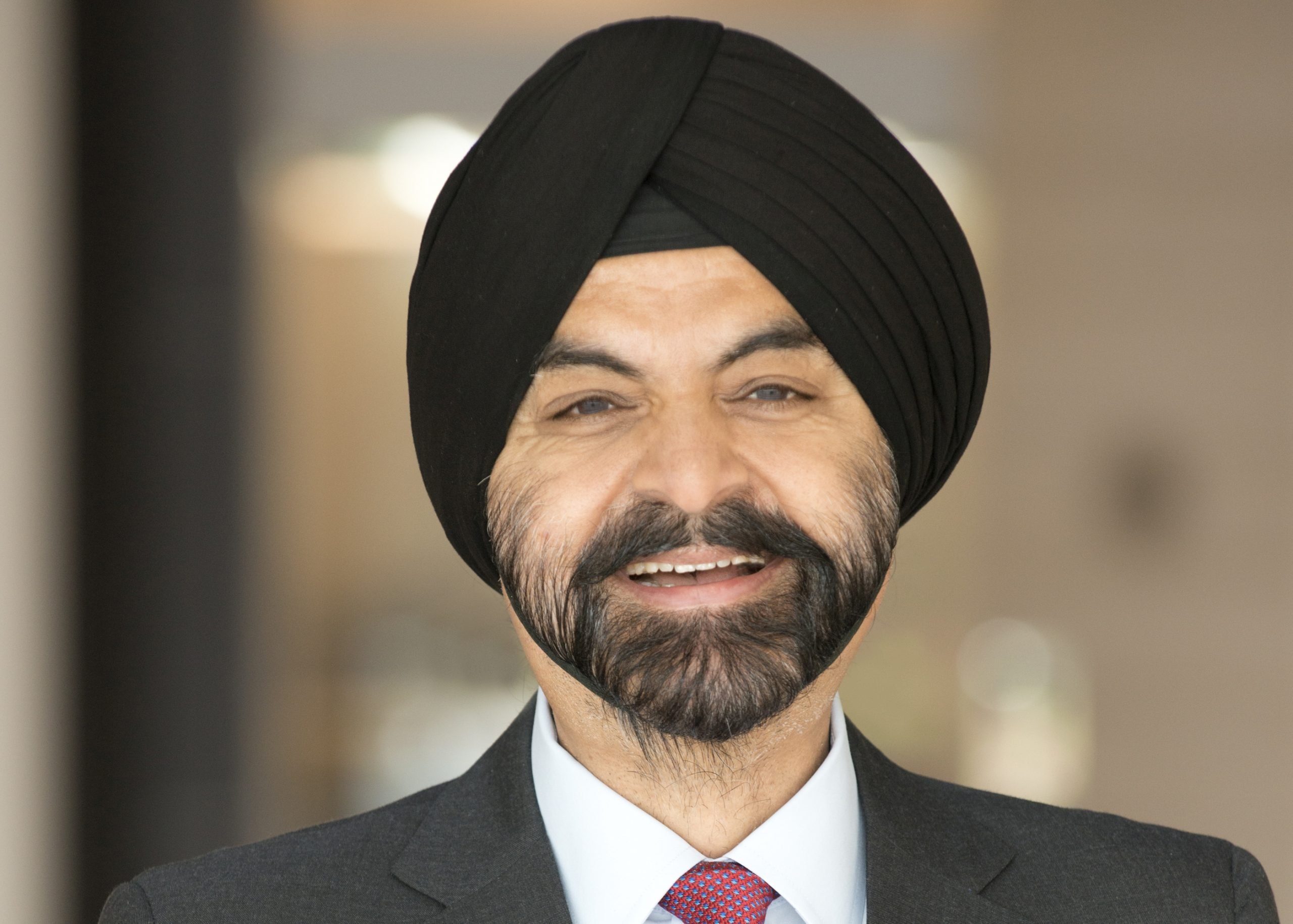 Ajay Banga is the Vice Chairman of General Atlantic, a leading global equity firm.  Previously, Ajay served as Chief Executive Officer and Executive Chairman of Mastercard and a member of its board of directors.

Ajay is a co-founder of The Cyber Readiness Institute, first vice chairman of the International Chamber of Commerce and a trustee of the United States Council for International Business. He is a founding trustee of the U.S.-India Strategic Partnership Forum, a member of the U.S.-India CEO Forum and is Chairman Emeritus of the American India Foundation. Ajay is also a co-chair of the Partnership for New York City.

He was awarded the Padma Shri Award by the President of India in 2016, the Ellis Island Medal of Honor in 2019 and the Foreign Policy Association Medal in 2012.

Ajay is a member of the board of overseers of the Weill Cornell Medical College and the board of governors of the American Red Cross. In addition, Ajay serves as a Director of Dow Inc. 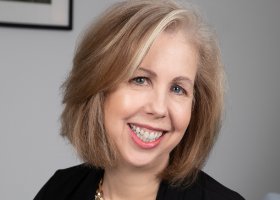 Nancy Gibbs is the Lombard Director of the Shorenstein Center and Edward R. Murrow Professor of the Practice of Press, Politics and Public Policy at Harvard Kennedy School. She is the former Editor in Chief of TIME, the first woman to hold the position, and remains an Editor at Large. During her three decades at TIME, she covered four presidential campaigns and is the author of more cover stories than any writer in TIME’s near-100-year history. She is the co-author, along with Michael Duffy, of two best-selling presidential histories, including The President’s Club: Inside the World’s Most Exclusive Fraternity (2012), which spent 30 weeks on the New York Times Bestseller list. She has interviewed five U.S. presidents and multiple other world leaders, and lectured extensively on the American presidency. She is co-chair of the board at the USC Annenberg Center on Communication Leadership and Policy. 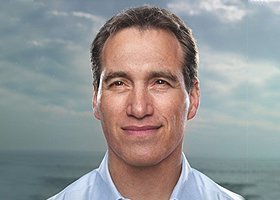 Named one of the “Top 60 Global Thinkers of the Last Decade” by The Economic Times, “the hottest advisor on the corporate virtue circuit” by Fortune Magazine and a “Game Changer” by Time Magazine, CEO, author and HOW Institute chairman Dov Seidman has built a career, and pioneered an industry, around the idea that the most principled businesses are the most profitable and sustainable. It is from this conviction that Dov founded The HOW Institute for Society in 2016, which seeks to build and nurture a culture of moral leadership and principled decision-making that enables individuals and institutions to meet the profound social, economic, and technological changes of the 21st Century.

Dov’s effort to institutionalize principle-based behavior began twenty years ago when he founded LRN – which advises and educates companies on corporate culture, governance and leadership – with the powerful vision that the world would be a better place if more people did the right thing. From that basic notion, he has grown a successful business that has helped to shape the ways millions of employees, managers and leaders behave and interact all over the globe.

Dov maintains that in today’s connected and transparent world, people and organizations stand to gain by dedicating new thought and energy to how they do what they do. That’s the inspiration behind his award-winning book, “HOW: Why HOW We Do Anything Means Everything.” Now updated and expanded, HOW includes a foreword from President Bill Clinton and a new preface from Dov on why how we behave, lead, govern, operate, consume, engender trust in our relationships and relate to others matters more than ever and in ways it never has before.

Led by a lifelong pursuit and passion for ethical leadership, he led the effort on behalf of LRN to become the exclusive corporate sponsor of the Elie Wiesel Foundation for Humanity Prize in Ethics in 2008, as the institution was in its 20th year of celebrating ethical decision making among America’s youth.

Dov is a member of the board at the 92nd Street Y, and was honored as the 2014 Corporate Organizational Excellence in Organizational Development Award winner for demonstrating a 10+ year commitment to organizational development and effectiveness. Dov is frequently invited to speak at leading industry events, and to senior corporate managers and boards of directors. Recent presentations include The Clinton Global Initiative Annual Meeting, The World Economic Forum, The World Business Forum, The National Press Club and The Aspen Ideas Festival. He has also been the keynote speaker at University of California Los Angeles’s annual commencement, and has received an honorary doctorate from Hebrew Union College.

Founder and Executive Chairman, The HOW Institute for Society 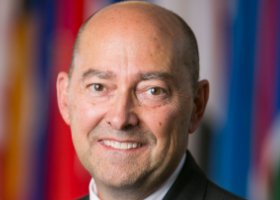 Admiral James Stavridis is an operating executive at The Carlyle Group and Chair of the Board of Counselors at McLarty Associates. A retired 4-star, he led the NATO Alliance in global operations (2009 to 2013) as Supreme Allied Commander, focused on Afghanistan, Libya, the Balkans, Syria, counter piracy, and cyber security. Earlier, he was Commander U.S. Southern Command (2006-2009) responsible for Latin America. He has more than 50 medals, 28 from foreign nations.

In 2016, he was vetted for Vice President by Hillary Clinton and subsequently invited to Trump Tower to discuss a cabinet position in the Trump Administration.

Admiral Stavridis holds a PhD in international relations and has published eight books and hundreds of articles in leading journals. His 2012 TED talk on global security has over one million views. Admiral Stavridis is a monthly columnist for TIME Magazine and Chief International Security Analyst for NBC News, and has tens of thousands of connections on the social networks. 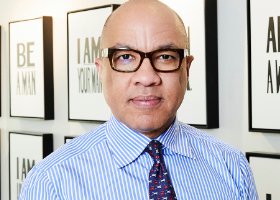 Darren Walker is president of the Ford Foundation, an international social justice philanthropy with a $13 billion endowment and $600 million in annual grant making. Darren chairs the US Alliance on Impact Investing and also serves on the boards of Carnegie Hall, the High Line and the Committee to Protect Journalists, and is a member of the Council on Foreign Relations. Darren received his BA and law degree from the University of Texas at Austin.

For questions about the Summit on Moral Leadership please email info@thehowinstitute.org.